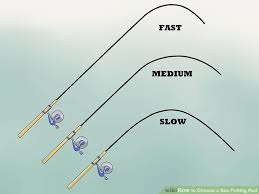 Today’s fishing rods have incorporated modern features that are not typical of the more primitive cane pole. Modern fishing rods contain reels, which aid in the retrieval of fish caught caught with live bait.

A much-sophisticated feature is the spinning rod where the entire shaft of the rod except the handle can move around on its axis to allow flexibility when fish caught on snare bait struggles through the water.

Like the classic cane fishing rods, the fishing gadget is thick at the handle (bottom) and is tapered and thinner at the tip. This very basic design allows handling stability and flexible movement of the entire length of the shaft. A typical fishing rod measures 6 and 16 feet (2 and 5 m) and vary in capability to tolerate strain in fishing activity. The length has a lot to do with withstanding force exerted by the fish to the pole and determines for the most part the performance of rods used for any fresh or salt water fish.

Cane poles are one of the smallest and less sophisticated gadgets in fishing. It is usually made of bamboo or other flexible wood material with the most basic line attached to it.

Unlike other more sophisticated fishing rods, cane poles do not usually contain reels or its equivalent to be used for reeling in or retrieving fish caught on bait. Cane poles have been around since early man first started to fish with a pole. They are still popular with kids because of their ease of use.

There are three major qualities that describe the capability of a baitcasting rod, and these are: Power, Action and Line Weight.

Power — The power of a rod refers to how much pressure it takes to flex the rod and defined by a descriptive scale from ultra-light to ultra-heavy.

Line Weight — Describes the tensile strength of the fishing line best suited to the flexibility and strength characteristics of the rod.

Casting distance is one of the important considerations of rod action, describing how fast it takes for the blank to return to the straightened, neutral position after being put under load. A ‘slow’ blank is going to flex in three-fourths of the total length and is a reference to its range of motion. In describing casting ability, the action of a rod pertains to its available energy; this quality is described as “rod loading.” The more the rod loads, the greater casting ability it will offer. Bait casting rods use conventional style rods and reels, and are typically in the light and medium weight class. A versatile rod, it allows the angler to vary their casts from overhead to achieve more distance, or to flip or pitch underhand when working in close and have been proven best for trout, salmon, walleye and bass fish. They vary in measurements from 5 feet to 12 feet in length.

Most spinning rods are made from graphite or fiberglass with a cork or PVC foam handle, and tend to be between 5 and 8.5 feet (1.5–2.6 m) in length. Typically, spinning rods have anywhere from 5-8 guides arranged along the underside of the rod to help control the line. The eyes decrease in size from the handle to the tip, with the one nearest the handle usually much larger than the rest to allow less friction as the coiled line comes off the reel, and to gather the very large loops of line that come off the spinning reel’s spool. Unlike bait casting and spin casting reels, the spinning reel hangs beneath the rod rather than sitting on top, and is held in place with a sliding or locking reel seat. The fisherman’s second and third fingers straddle the “leg” of the reel where it is attached to the reel seat on the rod, and the weight of the reel hangs beneath the rod, which makes for a more comfortable way to fish for extended periods. This also allows the rod to be held in the fisherman’s dominant hand (the handle on most modern spinning reels is reversible) which greatly increases control and nuance applied to the rod itself. Spinning rods and reels are widely used in fishing for popular North American sport fish including bass, salmon, trout, walleye are popular targets for spinning in the UK and European continent are pike, perch, eel and zander (walleye). Longer spinning rods with elongated grip handles for two-handed casting are frequently employed for saltwater or steelhead and salmon fishing. Spinning rods are also widely used for trolling and still fishing with live bait

These rods are best for heavy lures and baits especially when reaching around 180 to 200 feet under the waters surface. They are made of fine, solid materials which accounts to their heaviness. The use of jigging rods is specifically due to the need to control the action of a jig and live bait jig combinations.

At first glance, these rods don’t look like much. They’re generally short (6 feet is about the average length) and thin in diameter. Yet, they’re incredibly strong and lightweight. But, more to the point, they’re designed literally to work differently than fishing rods of 20 years ago.

“In the old days of mono fishing, you needed faster, stiffer rods because of mono’s stretch,” explains Robby Gant, senior product manager at Shimano, which pioneered deepwater jigging in the United States in the mid-2000s with its Butterfly tackle system. “But now, you don’t need that extra-fast, super-stiff rod. With these rods, we call it the bendy concept. The rods are really designed to bend down, making it much more comfortable on the angler.”

This “bendy concept” is more formally described as a parabolic (or U-shaped) curve — or in fish-speak, being doubled over! The rod now absorbs all the blows (where mono used to absorb much). And that’s a big reason why the blanks of so many jigging rods today are a composite design.

Before jumping too far into the gory details about fly rods, let’s talk about the function of a fly rod. A fly rod, at the end of the day, has three purposes. These are: