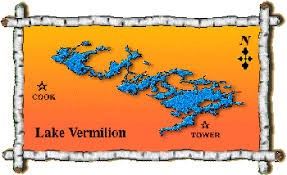 The Ojibwe originally called the lake Onamuni, which means “Lake of the Sunset Glow”. Way back in the day, when I was 16 years old, I went on a week’s fishing trip with a high school fishing buddy and his parents up to the fabulous Lake. We caught so many Walleyes we had to eat a few everyday to make room for the coolers on the way home. The “Eyes” averaged about three pounds, with the largest being about six pounds. 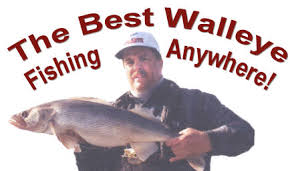 We caught all of our fish trolling slow, and bouncing the bottom with a three way swivel rigged with a half ounce weight and a red and white June-Bug spinner tipped with a Night-crawler. We trolled everyday with four of us in a 16 foot row boat powered with a nine HP Johnson outboard motor. There was never a time when one of us wasn’t fighting a fish, and sometimes two or three of us had one on at the same time.

None of our fishing party new anything about Musky fishing at the time we were there. Thinking back, there were three occasions when we saw Muskies coming up from the deep following our lures. One of them was an absolute beast! I remember thinking that it might have knocked us out of the boat if it hit us. To this day, I wish I could have known enough to give them a go.

The magnificent scenery, and the terrific fishing made this one trip I will never forget! Here’s a nice article of interest I got off the web Date Submitted:

September 22, 2012 Fall is in the air here on beautiful Lake Vermilion. The shoreline visage is growing more colorful by the day. Recent high winds, rain and snow squalls are harbingers of what’s to come…But I digress. It’s September 22nd and winter is a ways off yet. Some of the best fishing of the year is yet to come! Surface water temps are running 59 to 61 degrees on the big basins and as cool as 54 in the small bays. Turnover, in the areas of the lake affected by it, is just around the corner. Rather than going into a three page dissertation on turnover and it’s effect on muskies, I’ll leave it at this. Tweak your strategy and tactics and the muskies will respond in kind. I’ve caught several of my biggest muskies while the lake is flipping. Fish shallow areas of the lake and or current. They’re less affected by turnover. Fish the basins that are turning over, albeit a bit differently. I’ve found that muskies will often slide ultra shallow at this time. By this I mean water so skinny you may not believe a fish the size of a muskie can be there. Reefs that top out near the surface are prime real estate. Work shallow running baits right over them. Pay close attention to any spines or fingers projecting off the main reef. The muskies use these as entry and egress points, even more so during this time of turmoil in the water column. It’s pretty cool to see a muskie explode on a bait running over water that wouldn’t touch your knees. Fishing the break lines is also productive. Get right down in their face with a noisy crank or minnow bait. Baits with rattles really shine right now. The muskie’s lateral lines aid them in turbid water in the same way they do at night-They lock in on the vibration. Trolling can be equally as productive. Continue to fish the weeds as well. Work inside edges, outside edges and everything in between. Look for coon tail patches. I favor slow rolling big short arm spinner baits and ripping and pausing crank baits. Explode them off of the cover. Many hits come on the pause after a hard rip. Good weed beds will continue to hold fish long after most folks have given up on them. The walleye bite has been good the last few weeks. The overall size of the fish has been impressive with many of the keepers in the 16 and 17 inch class. I’ve also released a lot of nice inch slot fish. I had a fun day of walleye fishing recently with friends from Superior. A cool morning warmed into a warm, sunny afternoon and the walleyes were snapping. Lots of nice slot fish and some for the frying pan. There’s just something about walleye fresh from the lake… Trolling deep running cranks and jigging have both been effective. The trolling bite has varied. The fish are concentrated in some areas and scattered in others. The key has been to cover a lot of water. Deep holes immediately adjacent to steep breaking shoreline have been prime jigging spots. Stay vertical with a bright colored Northland Fireball Jig tipped with a fathead or rainbow and hang on! The fall colors are getting better each day. The fish are putting on the feed bag. The true fall bite is still to come….Have a fun and safe time on the water. Keep a few walleyes for the pan and let the rest go. Let all the muskies go.

Although this lake is not noted for terribly big Walleyes, you certainly will have a great time catching and eating them! I would give this Walleye heaven a real shot for a trophy Musky as well….. I think it might hold the next Minnesota record. Maybe even a new World record!