Every year or two, millions of pink salmon return to local rivers to spawn. It makes for great fishing, but it’s also tempting with so many fish ripe for the plucking to break the rules and poach or snag them.

As a result of poaching, the Fall-Run Chinook (King) Salmon population has been declining sharply, and getting worse every year!

One poacher can wipe out a whole generation of salmon. Poaching is just one of the threats facing salmon stocks, but is one which can be prevented.

Washington, who speaks on behalf of some 200,000 sportsmen, women and environmentalists who pay license fees and otherwise financially contribute to the economy of Michigan’s fish, game and other natural resources, says “poaching is nothing but stealing and fish and game are state property”.

What is Snagging? If you hook a salmon anywhere other than the mouth, you cannot keep it. A snagger casts a 3 inch treble hook into salmon filled rivers. He tries to stick the hook into the side of a homecoming salmon by jerking it along the bottom.

Many poachers or snaggers have an attitude problem, they think if it is there for the taking, then why not take it. Some have no respect for nature and think it is cool to snag fish for the sport and to make stupid videos and put them on websites like u-tube. Other poachers kill for profit, fencing meat to wholesalers who peddle it to restaurants.

(butchered salmon carcass left to rot after robbing its eggs)
Most poachers want the salmon eggs. They butcher the fish and leave the carcass to rot on the shore. This is a waste of the resource and can lead to public health concerns. Female salmon bulge with up to five pounds of eggs. The eggs can be bootlegged for $3.00 to $5.00 a pound. They usually go to Japan where salmon caviar is extremely popular, or they are sold as bait to fishermen over the WWW or bait shops all over the Great Lakes.
Every female salmon which is snagged by illegal poachers, is denying up to 5,000 eggs and threatening the very survival of this endangered species!

What Is A Fair Hooked Fish?
A Fair hooked fish is hooked in the mouth of the fish only. In the mouth means in the upper or lower gums of the fish. It also means inside the mouth. That is it. Anywhere else in the body of the fish is a foul hooked fish.

What Is A Foul Hooked Fish? 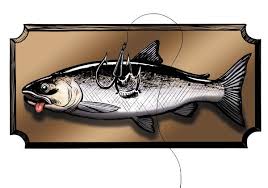 What To Do If You Foul Hook A Fish.
If the fish is not controllable, simply break the line off and start fishing again. It makes no sense to play out a foul hooked fish, when you could be fighting a fair hooked fish.

If the fish is controllable, play the fish quickly, avoid handling the fish, revive and release the fish as soon as possible.

Conservation officers work a lot of overtime during all the peak fishing seasons. A key factor to their success is the information they receive from the public about illegal activity.

People who fish according to the rules don’t like to see unethical behavior in the field. It tarnishes the images of outdoors people. The DNR counts on the public’s help to do their job of protecting public resources.

…..Here is what one die hard Great lakes Salmon fisherman had to say: “I understand it would be a shame to let these highly edible creatures die and rot but I still find “snagging” offensive. I love fishing. I must own 20 rods and reels. I have a cabin in Wisconsin. I grew up catching, cleaning and cooking Lake Michigan game fish. On slow days, gouging the belly of an unsuspecting fish may have crossed my mind but we always considered it sleazy, something a tramp would do.”

We need to preserve our future crop of salmon so we can enjoy the fight and natural beauty of a strong salmon run. Plus it makes the fish very line shy and less likely to actually bite. I don’t want any part of snagging and feel it should be banned anywhere Salmon and Trout spawn in the USA!

I strongly encourage everyone that fishes to report poaching snaggers! It is a crime in most states and poachers should be punished.  We all need to do our part to ensure that there will be plenty of fish for future generations to carry on the family traditions and the great sport of fishing.