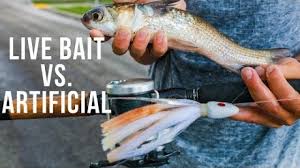 Good things happen to those that BAIT!

It’s kind of like that old saying “Fish or Cut Bait” — It’s all about knowing when to use live bait rather than throwing artificial lures….. Most of the time using live bait will catch more fish but becomes boring at times.

ARTIFICIAL LURES –  One of the greatest rewards in fishing is being able to fool a fish into hitting a piece of plastic. Artificial baits such as plugs, poppers, jigs, metals and soft baits are designed to mimic many of the bait fish species predators feed on. The key in choosing the right lure is to pick the right offering that has the same flash, vibration and profile of the bait fish the target species is feeding on. Lures are generally used when fish are feeding aggressively. They can also be utilized to entice a strike out of a lazy fish that would normally just be happy to wait for some other food.  Lures allow you to adjust and be in control of selection to adapt to water color, temperature and presentation. Overall, it may seem ridiculous that human beings can get so riled up about fooling a fish, but tricking a fish on a lure is a challenge with serious rewards—just ask anyone who has seen a large mouth bass crush a top water popper, or a trophy Musky hitting a fast moving surface lure!

LIVE BAIT – “Live bait works best” is definitely rooted in truth. Both live and dead bait brings about everything fish desire – the smell, color, taste and profile. Freshwater baits consist of shiners, fathead minnows, night crawlers, meal worms and salmon eggs. Saltwater type baits can be anything from fresh clams to ballyhoo, even small tuna. About the only issue is keeping live bait live and fresh bait fresh as it may require some effort for upkeep in a live well, bait bucket or stored in a fridge. The true key to bait fishing is knowing what bait to throw to match what specific fish are feeding on i.e. don’t throw eels when strippers are feeding on a cinder worm hatch. Understand what fish are feeding on at any given time of day during the year as it switches up as the seasons shift. 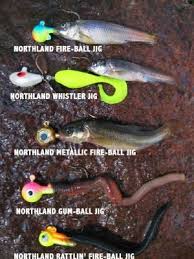 Night crawlers, leech or a minnow hooked on a jig is probably the most used lure/live bait combination in the history of modern day fishing, used primarily fishing for walleyes.

Fishing with live bait requires more patience at times, thus the saying “bait and wait”, but it’s an extremely effective way to get kids or anyone else, for that matter, interested in the sport, mainly because the odds of success are greater with minimal amount of true effort or skill, which is generally needed when working a lure.

As always, in the life of anyone that fishes, experimentation is the best teacher. The weather, the body of water, hours when fished are never static. Just when you think you have mastered the great sport of fishing, THINGS CHANGE! Knowing how and when to adapt is the key!