This article is meant to be both humorous and educational depending on the reader! In some cases it might even clear up the thinking that some have about “TROLLING!” 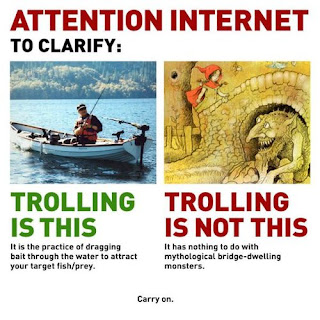 Trolling is the practice of dragging a lure through water to attract your target fish….. What would fishing on our great oceans & freshwater fishing be without trolling?

Most people know what trolling is when used in terms of fishing, even  people that don’t  even fish! Over the years when  I just mentioned I was going trolling, I got some funny looks!    It’s sometimes  confused with some other meanings , like  the mythological  bridge dwelling monsters (trolls). Some say it means going to places where people hang out, like bars, looking for someone to meet and perhaps score with!

A web troller is  commonly encountered on the Internet, and are thought of as people who purposely try to cause controversy in  web communities by posting offensive and crude comments, or tries to provide advice for his own amusement,  to prove how extremely corrupt our society is.

The First Amendment of the US Constitution protects free speech and makes it difficult to punish people who post offensive messages. But concern over net nvitriol is growing.

Facebook’s former marketing director Randi Zuckerberg and Google head Eric Schmidt have both suggested anonymous posting should be phased out. One of the difficulties is that trolling is a broad term, taking in everything from a cheeky provocation to violent threats. Why people do it continues to baffle the experts.

Trolling can be phonetically confused with trawling, a different method of fishing where a net (trawl) is drawn through the water instead of lines. Trolling is used both for recreational  and commercial fishing whereas trawling is used mainly for commercial fishing.Trolling is a method of fishing where one or more fishing lines, baited with lures or bait fish, are drawn through the water. This may be behind a moving boat, or by slowly winding the line in when fishing from a static position, or even sweeping the line from side-to-side, e.g. when fishing from a jetty. Trolling is the primary method used  to catch Salmon & Trout on the Great Lakes.

Trolling from a moving boat involves moving  slowly through the water.  Multiple lines are often used, and devises like downriggers,  planer boards, Depsi divers and out-riggers can be used to obtain a certain depth  and spread the lines more widely to reduce their chances of tangling. Trolling with leadcore line has become one of the most effective methods of trolling on the Great lakes in the past few years.  Trolling allows you to present your offering, precisely and quietly, to some of the productive spots in lakes or large rivers. It’s efficient in that it always keeps your fly or lure in the game. It is a devastatingly effective tactic for salmon, trout and a host of other sport fish on the Great Lakes. Better still, it is the great equalizer, especially when someone with less than stellar casting abilities is aboard the boat; in other words, when you’re trolling, everyone has a chance. And, as if that’s not enough, there’s no better way to prospect for hot spots on a new lake. Salmon and Trout roam certain areas of a lake to find food. The only way to find the hungry ones is by trolling effectively, with the help of sonar devices.