The answer is:  It sure does! 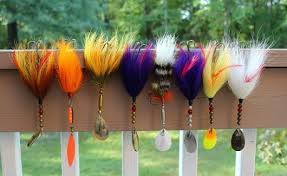 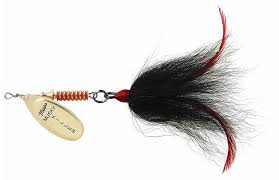 This bucktail accounts for more trophy Musky caught than any others!

Most notable Musky Hunters say use any color you want, as long as it is BLACK!

Indeed a black Musky Giant Killer bucktail is what I caught my biggest musky on. Of course,  that only means it was what I was using at the time my trophy Musky hit. Case in point; a friend of mine caught two 32 lb plus muskies not two hours apart at the same location up in Lake Of The Woods, Canada.  Both trophy muskies were caught on a Musky Giant Killer.  One on a black Giant Killer, like the one above, and the other on a white Giant Killer!

Talk to ten different musky Hunters about what their favorite musky color is and it’s a good bet that opinions will vary greatly. Yet, in many cases there are obvious preferences and ” accepted” color philosophies.  Here they are in the order of the most used to the least used: Black, white, yellow, purple and chartreuse. Although I think color does matter, being in the right place at the right time has more to do with it than anything else.  As I mention in some of my other articles, luck has a great deal to do with musky fishing…..Just because I use black bucktails most of the time, does not make black the best color! Musky hunters will use the color bucktail that they believe in most, whether it is black, white, yellow, purple or any other color. When they happen to get lucky by being in the right place at the right time,  the color they were using at the time will become their color of choice.

I think a musky will hit a pink hot dog with hooks! So, you tell me…..Does color really matter?  Think the yellow mustard on the hot dog might make a difference?

Top fish biologists and ichthyologists both claim that nearly all fish can see colors. In fact, they claim that fish can actually see colors far better than humans can. The eyes of most living creatures contain things called “rods” and “cones.” Rods in an eye dictate black and white color perception,  while the cones are for color. The actual number of rods and cones in a living creature supposedly relate directly to its color perceiving ability. By comparison, fish have  far more rods and cones in their eyes than humans do.

The ability to see color varies with individual fish species. Walleyes, supposedly , see and respond to hues of green and orange far more readily than any other colors. Bass show a strong response to green and orange too, but seem to love color hues of blue and purple. Trout and salmon seem to prefer greens and blues.

Actual scientific data on Musky color preferences is very limited. The color black, which isn’t really a color, is the most widely accepted lure tone for muskies, especially in bucktail spinners.  In a large percentage of tests, it’s was concluded that muskies clearly wanted black. However, there were just as many times when other colors worked even better or were preferred. Researchers just can’t say with exact certainty because musky hunters do not experiment enough with other colors enough to get a true preference.

Muskies definitely do see colors, and more importantly, respond to specific color combos at times. It’s very important to realize this fact, and to experiment with various color combos. Yes there are times when it does not make a difference at all. Just remember there are, and will be many various colors created by innovative minds , and some colors have been proven to be winners as well. Others, of course, catch more musky fisherman than they do fish!