Walleye Capital Of The World

Walleye Fishing Is Awesome, But Walleye Eating Is Better. There are many types of fish out there, and most are edible if cooked right. … There are many ways to catch walleye, and many places to fish for them, but once you eat one for dinner, you’ll be hooked for as long as you can fish!! There is a pun intended…..

The fantastic eating, glassy-eyed needle-toothed fish’s popularity only partially explains the pile-up of redundant “Walleye Capital of the World” claims made by tourism bureaus of little lake towns. Maybe a brain-damaging chemical accumulated in the fish makes walleye eaters blind to the obvious.

How many Walleye capitals can there be? You be the judge! 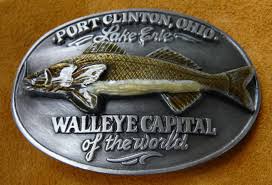 Is Port Clinton the Walleye Capital of the World?

Most Walleye fisherman living near Chicago would rather fish Port Clinton on Lake Erie than any other lake in the Mid-West. For my money, it is truly the hottest of all Walleye fisheries. The Western Basin on the lake including the productive reefs along the islands,  ranks as the all time greatest trophy Walleye fishery in the world. This is where most Chicago area Walleye fisherman go to catch big trophy “Eyes” . In the Fall it is not uncommon to haul in fish over ten pounds on a regular basis. These fertile waters continue to please.

Port Clinton, Ohio: Since 1996, the Lake Erie fishing village of Port Clinton, Ohio has augured in the new year with “Walleye Madness at Midnight,” when they lower Captain Wylie, an 18-foot long, 500 lb. fiberglass walleye, by crane from a roof in downtown Clinton. A local volunteer in a bow tied Captain Wylie costume wanders the sidewalks during events and parades….. The town holds an annual Walleye Festival on Memorial Day weekend, when they crown the new Junior Miss Walleye. Port Clinton gets points for its over-the-top commitment to the Walleye theme. Even inexperienced fisherman, by using guides to bring them to the best spots on the lake.

Therefore, I think most would agree that indeed Port Clinton on Lake Erie is the “Walleye Capital of the world!”

Here is what one walleye fisherman had to say about the port:

Port Clinton is the place to go if you want multiple BIG walleye – 28″ are common, 25″ are considered pests.  I never caught so many big fish in my life. Mid-Spring is the time to go and yes it gets very rough, just like Lake Michigan. I would suggest getting a guide the first day you are out there so you can pickup some tips and find out where the bite is located as the fish move around a little bit. Seems everyone runs spinners on boards and in certain conditions they will run deep cranks.

Naturally I’m partial, as I live closer to Port Clinton! It does seem that the Walleyes run smaller up north, and a whole lot bigger from Lake Erie!

There can be only ONE Walleye Capital of the World.

Garrison, Minnesota: Walleye worship became official in Minnesota after it was designated as the state fish in 1965 by the MN legislature. Moving quickly, the town of Garrison declared itself “Walleye Capital of the World,” in part because the adjacent lake, Mille Lacs, is the most popular walleye spot in Minnesota. A scant 15 years later, they commissioned a 15-ft. long fiberglass Walleye Pike (from F.A.S.T., natch) for display in an annual parade. Today it is permanently installed along the shores of Mille Lacs.

Garrison, North Dakota: Okay, there’s something a little creepy about two towns in different states both named GARRISON and both claiming to be “Walleye Capitals.” Wally, “World’s Largest Walleye,” is the 26-ft. long symbol of this Garrison’s claim to the title “Walleye Capital of the World.” Turn onto Main Street off of ND 37 and you’ll see him — his tail curled in mid-thrash, his fins erect and menacing, his toothy mouth agape — floating above the park at the far end of town like an angry, blind fish god.

Large walleye statues can be found in other Minnesota towns, perhaps hesitant to join the “capital” fracas:

Umatilla, Oregon: Umatilla has no statues to cement their claim, but it does have an annual tournament –and the fish caught in Umatilla are 12 lbs. vs. a scrawny 8 or so for Baudette.

Mobridge, South Dakota: No statue here, either, or much of a current Chamber of Commerce push. But they claim to be known nationally for outstanding walleye fishing. Also home to Sitting Bull’s bones.

Shell Lake, Wisconsin: The town doesn’t appear to be claiming anything beyond a notion that they are “Walleye Country” (“Year Round Recreation”). But their Walleye statue/sign has an unusual feature: the fish has two tails, making photos attractive from either side, and really strange from the back.

Baudette, Minnesota: The largest tribute to the fish is Willie Walleye, over 40-ft. long and weighing about two tons. Wille was constructed in 1959. The town’s festival, Willie the Walleye Day, cranks up the first week in June. Baudette lays claim to the title “Walleye Capital of the World,” though signs on approaches to town state, simply, “Home of Willie Walleye.”

If bigness of statue is the defining quality of the “Walleye Capital of the World,” then Baudette holds the title.

There are, and have been other cities that claim the same thing…..It seems like it depends on where you live!  At any rate, you can judge for yourself…..It may never be decided!